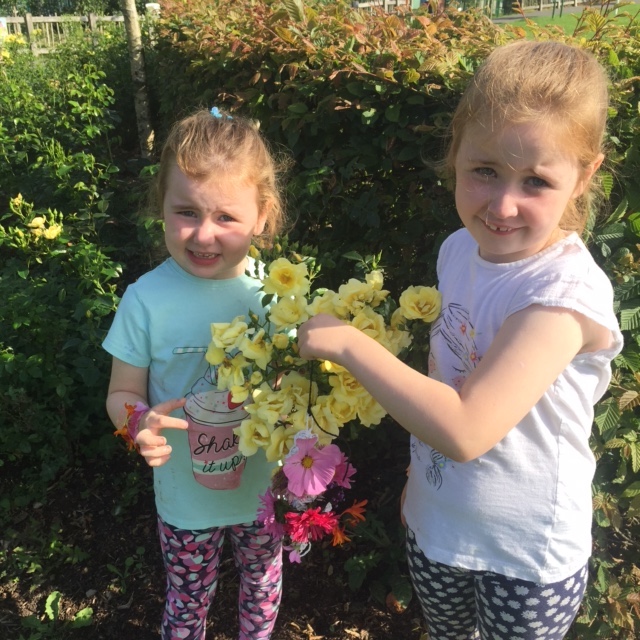 The Art Hive movement is an international network of community art studios where everyone is an artist. “It’s a welcoming place to talk, make art and build communities” and “fosters self-directed experiences of creativity, learning, and skill sharing” (www.arthives.org). For more information visit the Art Hive website: http://arthives.org. 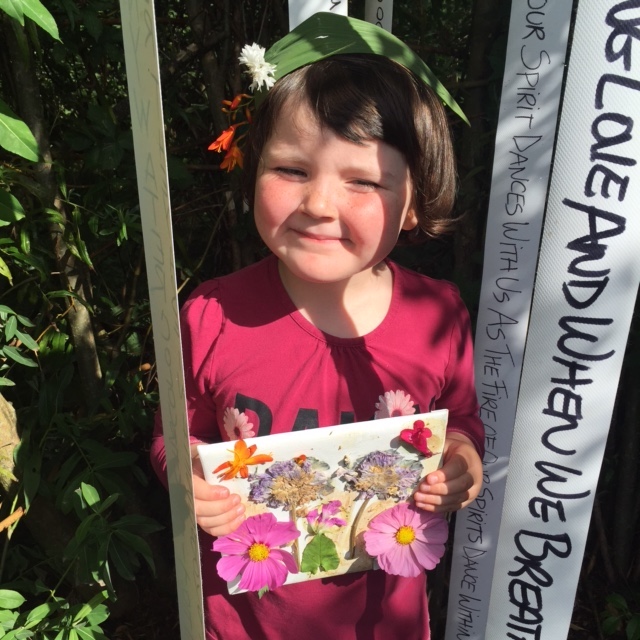 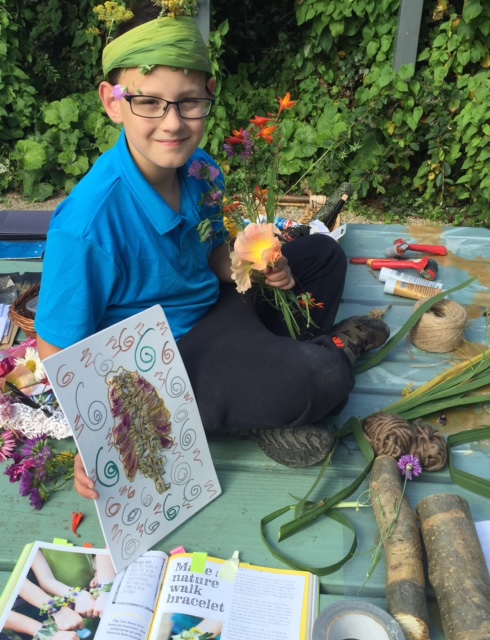 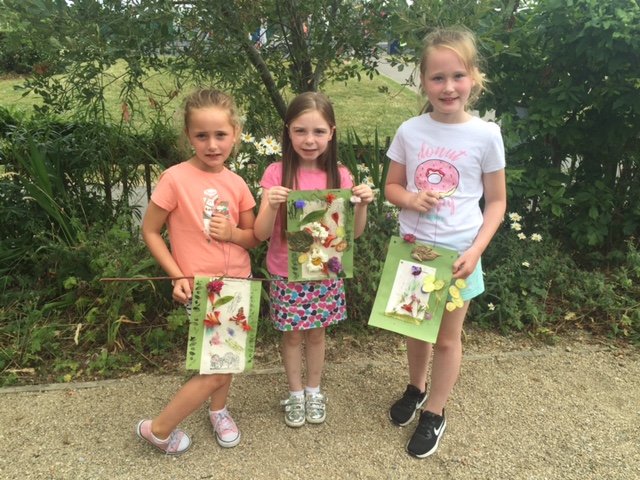 Photo: Flower collages and leaf and flower prints made by children attending the Blackrock Art Hive.

The Blackrock Park Art Hive is located in Blackrock, County Louth. Blackrock is a traditional seaside village on the east coast of Ireland. Blackrock Park is a community crafted park, designed and cultivated by hundreds of adults and children who live nearby. The gardens in the park are biodiversity and pollinator friendly. There is a forest garden (with edible wild foods), a medieval garden, a Celtic garden, an intergenerational flower garden, a wildflower garden, and a composting education area. These gardens also showcase the artistic and horticultural talents of environmental volunteers and local school children. Three local primary schools have created nature habitats in the park accompanied by pubic celebrations incorporating music, dance, poetry, wild foods, and environmental education. 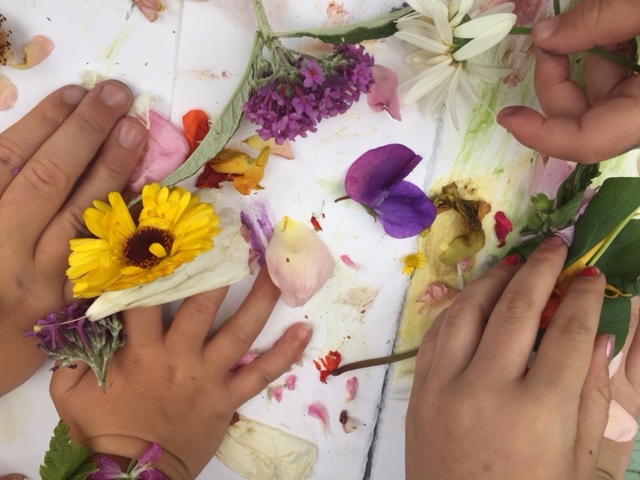 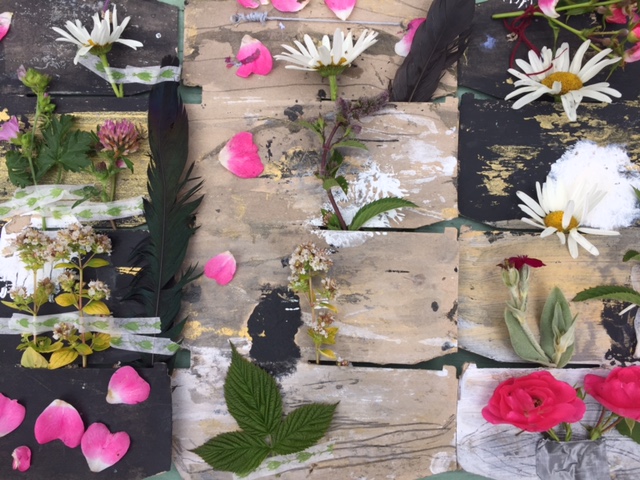 During the summer of 2018, The Blackrock Park Art Hive created outdoor studios for families who worked with natural park materials to make art accompanied by creative writing and garden installations. 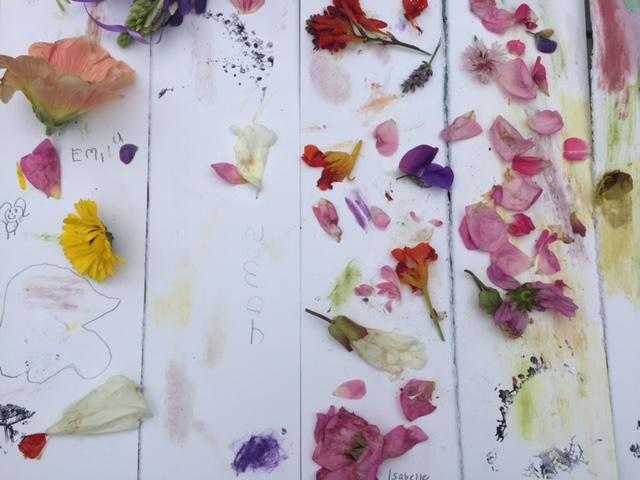 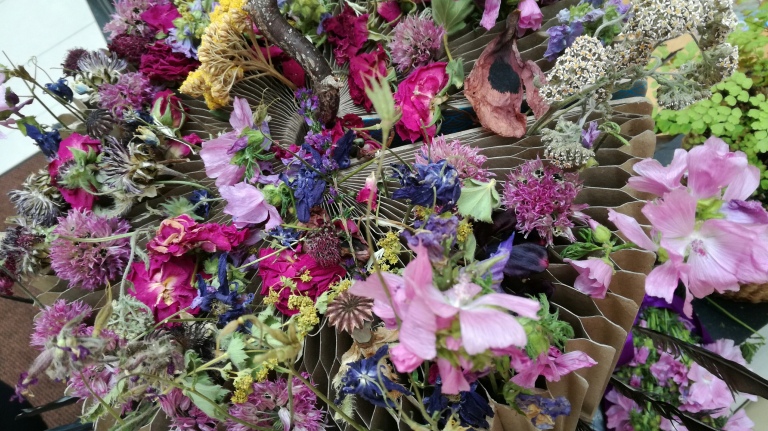 Photos Above: Artworks made by children in the Blackrock Park Art Hive and a dried flower art hive display at An Táin Arts Centre, Dundalk, County Louth

The Blackrock Park Art Hive encourages families to learn about gardening as an environmental art by making art with nature, and working within outdoor studios. The goal is to also invite families to link walks with the foraging of art materials. Ultimately these found materials will compose the home studio, where each family member contributes their art to the home environment. Working as an artist collective, families designate a space in their home for the artful exploration of the natural world, their locality, and what is found along the walking routes of their travels together. 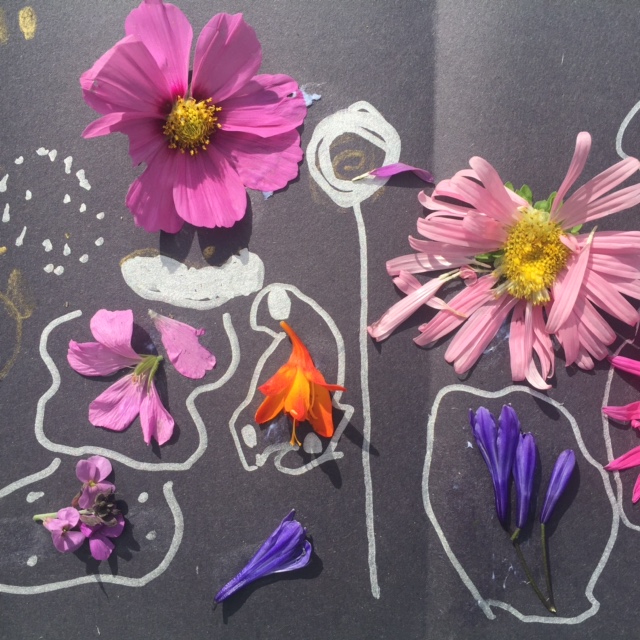 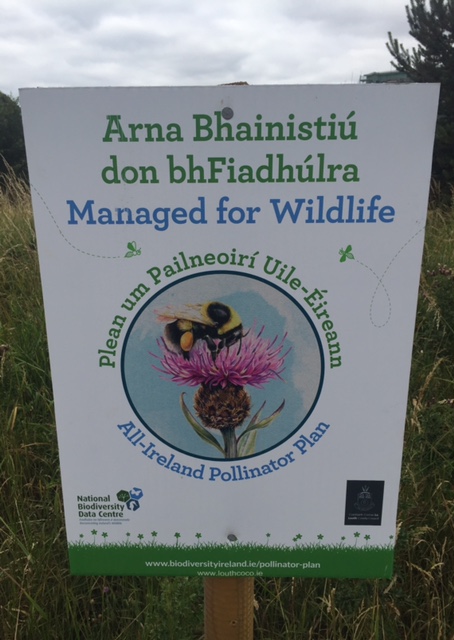 Blackrock Park has been designated pollinator friendly and has developed habitats for solitary bees. Wildflowers and perennial flowers, long grass, clay banks, log piles, and decaying wood are all homes to different varieties of solitary bees. The park’s orchard and soft fruit area directly benefit from these bee habitats, which can be closely observed by park visitors. 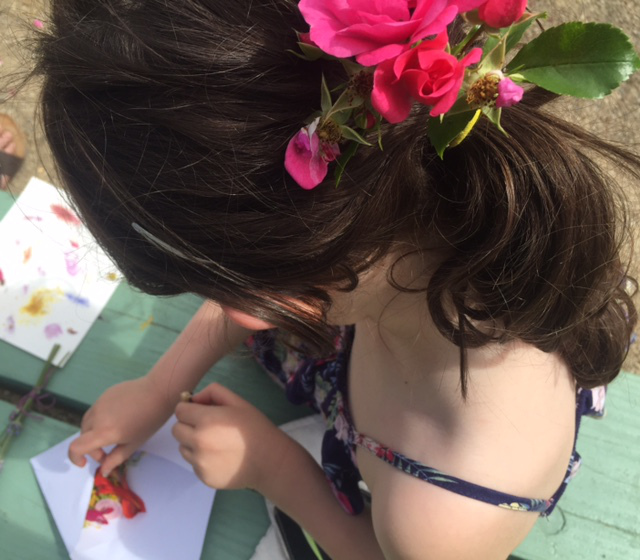 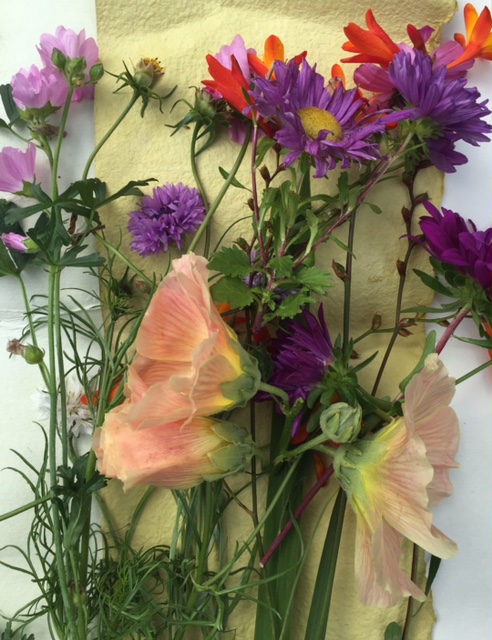 Interview with Pamela Whitaker for Envisage, the Canadian Art Therapy Association magazine. Interview questions by Patricia Ki, Editor of Envisage. Interview to be published in Autumn, 2018.

“As every Art Hive has its unique characteristics and features, what
would you say are unique to the Blackrock Art Hive?”

The Blackrock Art Hive is located in a community park cultivated by hundreds of volunteers aged 2-85. The park is intergenerational and composed of biodiversity—many people planting a garden as public art and as an expression of inclusivity and botanical creativity. The garden is organic, pollinator friendly and encompasses a philosophy of activism and participation.

Blackrock Park is part of the Pollinator Plan for Ireland, which is a national initiative to develop sustainable flower-rich landscapes by community volunteers. Blackrock Park is home to solitary bees (pollinating bees that live within plant stems, clay, decaying wood, or crevices between stone walls). A solitary mining bee inhabits the art table used for the Blackrock Park Art Hive. Flowers became a theme for the artworks in this Art Hive, based on the link with bees and pollination.

What inspired or attracted you to develop an Art Hive at Blackrock
Park?

I was inspired by the Art Hive movement in Canada, its philosophy and its vision developed by Janis Timm-Bottos and Rachel Chainey. I wondered if it was possible to develop pop-up Art Hives that acted as a series of encounters between children, adults and a garden environment. The surprise element of this kind of spontaneous art hive captivated participants. It offers a space to interact with nature and be part of conversations that explore sharing and connection between people and the natural world. The artworks become a memory, a gift, and an object to hold on to—a way to bring the essence of these encounters home.

“What are your hopes for the Blackrock Art Hive? What directions do you
see it growing in the next months or years?”

The Blackrock Park Art Hive will develop into a celebration of festivity marking the changing seasons and social customs associated with the traditional Irish agricultural year. For example, the next Art Hive event will be held at Samhain (Halloween) an Irish harvest festival, marking the official end of summer and the beginning of the Celtic New Year. Samhain encourages feasting, the lighting of fires, costumes and communications with “otheworlds.” The tradition still exists where treats are given to entertainers (of any age) for their songs, stories and revelry. For many years a large community Samhain celebration has happened in Blackrock Park, where this sense of festivity has prevailed through song, poetry, costumes, and rituals marking the return of shorter days, darkness and the aspirations of a new year beginning.

“When thinking about the workshops and gatherings that have happened at
the Art Hive so far, is there a story or moment that stands out to
you?”

There are many moments when children and family members realise the significance of working together as an artist collective. The artworks made in the Blackrock Park Art Hive can be taken home and lived with. It generates the beginning of the home studio as an environmental installation. A family displays their artworks within domestic space as a surrounding that represents each person as a unique maker. Family members are encouraged to generate a home atmosphere where their artworks belong together, as an assemblage of identities and perspectives.

“Is there a story or moment in which you found yourself gaining new
learning in art therapy through the Art Hive?”

I have learned the significance of meeting children within a pop-up impromptu outdoor studio located within a forest garden in a community park. There is a children’s playground near the outdoor studio, so the studio exists in an area already frequented by children and their families. The forest garden was planted by local children and their teachers/parents/guardians between the years 2011-2017. A forest garden is composed of edible trees, flowers, wild plants and herbs. It acts as a hideaway, a shelter, and a biodiversity habitat. The area is not exposed, but found, it is a place apart surrounded by the artistry of nature. The forest garden can be foraged for art materials—it is living studio.